Free books at Once Upon a Time

Check out Once Upon a Time, an eclectic book blog devoted to fantasy and speculative fiction. It’s a fascinating place to get new reading ideas and today they are featuring x0 with a giveaway of two free electronic copies.

Posted by Sherrie Cronin on June 29, 2012 in One of One elsewhere

Tags: books, fantasy, free, One of One

Please check out the fine blog Books and Tales, and skim down below my bio on their blog to read my first real online interview.

Posted by Sherrie Cronin on June 27, 2012 in One of One elsewhere

Tags: interview, One of One

Rebeka Harrington caught my attention on a writer’s website by saying she liked to cruise the internet as her alter ago Bektamun, a 3000 year old vampire with a penchant for revealing secrets. Bek (and Bektamun) have just released a second novel and she has agreed to answer a few questions about her new book right here on this website!  Read on.

Escape from the religious war leads Nicole and her family to the most unlikely rescuer, a vampire.  Nicole discovers love and a new life, but finds herself inexplicably drawn in to a private war between her protector and an extremist faction of vampires. The deeper she gets involved in the vampire world the higher the price she will have to pay to obtain her desires.

Rejoin “Vampires Revealed” narrator Bektamun, in Paris 1572, at the height of the religious war between Catholics and Huguenots, the day of the St Bartholomew’s Massacre.  Discover the story behind her rescue of the Gervais family and how Nicole became her Avetser and was made vampire.  Desires Revealed will also introduce you to Oskar, leader of the Eleiveb.

1. So this is  the second book in your series.  How much do I have to have read the first book to enjoy the second?
I don’t really like to think of this as a series, more a collection of similarly themed stories. And I admit, that is probably just me trying to dodge the pressure of having to write a series.With Desires Revealed I’ve tried to make it as stand-alone as possible, simply because it is a very different style of writing from the first. Most people are going to like one more than the other. If you’ve read the first one then you will likely join the dots quicker, but it’s not essential to be able to enjoy the story.
2. It has a historical setting. Do you also think of this as somewhat of a historical novel?
That’s a tough one, but ultimately I suppose I would have to say yes. One of the key concepts in the book is the role and expectations women had to face during that era.
3. Is there anything you can share here that sets your vampires apart from from the other fictional vampires out there?
Warning: this a major spoiler if you haven’t read the first book. My vampires were born and descended from humans. Now go and read the first book to find out what other vampire revelations I have in store for you 🙂

Raised in country Victoria, Rebeka started her writing career working for the local newspaper as a

teenager. While she decided not to pursue this as a career, she has always enjoyed writing and being creative With so many varied interests and eccletic taste in most things, Rebeka enjoys incorporating all of them in her writing. She particularly enjoys writing about vampires. Rebeka seeks to define and explain vampires in a way not done before. This was achieved with her debut title “Vampires Revealed”. Following titles revolve around exploring the world and characters created in her first release.Currently Rebeka lives in Melbourne with her “demented” but lovable cat, dividing her time between writing and managing a small boutique entertainment agency.

Posted by Sherrie Cronin on June 25, 2012 in other authors

Yes, you can get a paper copy of x0

If you do not have a device for reading electronic books and and you would like to read x0, you can!

Please go to the x0 site on smashwords where you can purchase the book for about half the cost of a beer out, and

download it in pdf format. You get the whole book on your computer and can read it there or print it out or any combination of the two that suits you.

To find the book, it is important that you turn off the “adult” filter.  The default is for the filter be on.  x0 is not an “adult” book” by any stretch of the imagination, but it does contain some mature content and so it sits behind this fence.

If you try this process, I would love to know how well it works and of course what you think of the book.  I hope you enjoy!

Tags: One of One

Please enter the world of y1 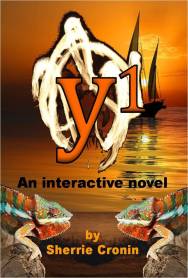 new blog devoted to the second novel in this collection has gone live and will be adding content over the next few months. Check it out here. I’m very excited about developing it!  As always, your comments and suggestions are most welcome.

The preliminary cover is shown on the right. If you’re already in the mood to offer an opinion, feel free to weigh on whether the cover should feature one chameleon (the book is about being unique) or two (it would be so nice to match the cover of the first book).  Other thoughts are welcome as well.

Posted by Sherrie Cronin on June 11, 2012 in my other novels

Welcome to the World of x0

Somewhere between fanciful places and the world one knows is the universe of x0, where an ancient organization prefers to stay hidden while seven billion people lead normal lives and seven hundred or so do not. This latter group includes Lola, a Texan geophysicist who doesn’t believe in nonsense, and Somadina, a young Nigerian who thinks her abilities are perfectly normal. These women hav

e at least two important things in common, and they are about to learn how well that will forge a powerful link.

When Somadina’s sister becomes a captive, the young Igbo woman draws upon her power to find an ally.  Across an ocean, an unexpected lay-off and a near fatal accident combine to reintroduce into Lola’s mind a rather disturbing phenomenon. Lola disregards it. Medicates it. Analyzes it. Sips more wine on her porch. However, the changes taking place inside her will not be ignored.

While the rest of the world lives out a perfectly normal 2009, Somadina accepts that her sister has become a strategic pawn in a larger and more dangerous game and that she must get the attention of this kindred, uncooperative lady.

x0 reluctantly emerges from the shadows, because somebody really needs to intervene. Both women are far more powerful than they realize, and to make matters worse, a fringe fanatic may be on the verge of altering a nation’s future.

Tags: Nigeria, oil, One of One, sisters, telepathy

Please check out a wonderful website for both aspiring authors and avid readers called “Worthy of Publishing“.  You will need to register to enter, but once in you can search by genre for countless free samples of novels in the making.  The authors are anxious to meet you and excited to hear what you think.

Search for y1 or under books by Sherrie Cronin to preview the nearly final versions of the the first two chapters of y1. I’d love to hear your comments!

Like Loading...
Comments Off on be my ad hoc editor and preview the first two chapters of y1 now

Posted by Sherrie Cronin on June 4, 2012 in my other novels